Humates are fossilised plant material originating from a period which pre-dates the dinosaurs. The dark powder contains the dense mineral component which characterised those ancient plants. It also contains the amino acids and many of the other beneficial phytochemicals from that original plant matter. Humates have proven invaluable as a soil additive where their multi-faceted benefits include detoxification, chelation, enhanced nutrient and water storage, plant growth promotion and powerful biological promotion. In fact, humates are arguably the single most effective soil regenerator available, and their rapidly increasing popularity throughout the world is testimony to their potential.

The Chinese have pioneered the use of humates in agriculture, although the Russians have also conducted extensive research in this field. In China, a sustainable agricultural system, involving the feeding and nurturing of highly productive soils, had existed for three thousand years. In the 20th century the communist government promoted the introduction of chemical fertilisers which rapidly exposed the fragility of these soils. Humates were researched and introduced on a large scale to counteract the effects of chemical fertilisers. Humates stabilise and buffer the leaching and burning associated with these artificial fertilisers and they also magnify their beneficial effect. 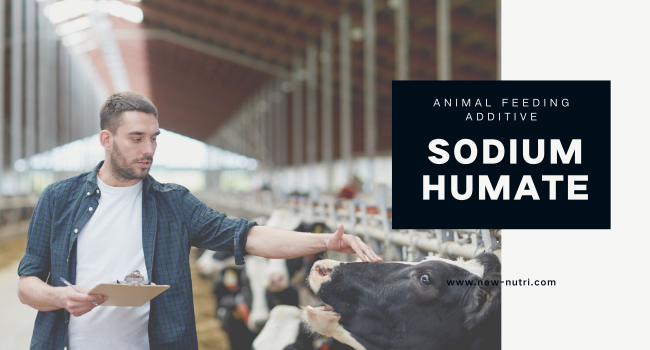 Despite the expanded awareness of humate potential in horticulture, there is still very little understanding of the potential in animal husbandry. The Chinese, who successfully introduced acupuncture and their traditional herbal medicines to the West, have been utilising sodium humates in the animal feed industry for over 25 years and they are passionate about the many benefits.

The benefits of humates in animal health are remarkably similar to those in the soil. Where humic acids help to balance the critical fungal:bacteria ratio in the soil they can also stabilise the animal’s intestinal flora to improve feed efficiency (5% to 15% weight gains have been reported in cattle, pigs and poultry). Where humic acids are similar, buffering agents in the soil they can also offer a protective mechanism in the animal where they are able to form a protective film on the mucous lining of the gastro-intestinal tract. This film also helps to prevent excessive losses of water via the intestine.

Humic acids have been hailed as the most powerful detoxifying agents available for the soil but they can perform a similar function in the sick animal. Humic acid has a CEC (cation exchange capacity) of 450, which can provide an adsorptive capacity similar to activated charcoal to soak up and isolate toxins (before they can cause cellular damage). The physical manifestation of disease is often a negative response to the toxins released by the infectious microbes. When humic acid is used to bind these toxins there is often a dramatic reduction in toxicity.

There are also other gut biology effects associated with humic acid. These ubiquitous organic acids can assist the breakdown of both the carbohydrate and protein components of bacteria and virus particles while supporting the proliferation of beneficial probiotic species.

Research at the University of Leipzig, Germany, demonstrated the effect on population of several bacteria including E. coli, two strains of salmonella and the staphylococcus responsible for mastitis. Similar effects were recorded with viruses including adenovirus 2, Rota-virus, Echo-viruses and Herpes Simplex Type 1.

The detoxifying benefits of humic acid in the soil cover the full spectrum of accumulated toxins associated with chemical farming. These unwanted toxins can also be removed from the animal body. Scientific research has demonstrated that heavy metals, nitrates, fluoride, organophosphates, carbaryl and chloride organic insecticides can all be adsorbed and excreted when humic acid is added to the diet. In plant management, humic and fulvic acids can be used as rescue remedies when a plant has been damaged by storm hail or other environmental extremes. Part of this restorative capacity is based upon supportof the plant’s immune system and release of associated system protectors. In animal husbandry, there is a similar immune-supporting response, which is comparable in principle. Humic acids supportimmune system receptors in the gut lining. This immune response can be evidenced by a substantial increase in white blood cell activity.

Humates are destined to become a major input in animal husbandry and their potential in human health will also be fully realised at some point in the next decade.

What crops are New-Nutri fertilizers suitable for?

Attentions to Formulation of Seaweed Extract